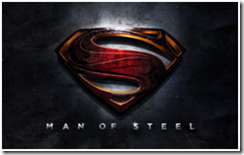 Before going to see Man Of Steel, I saw the trailer which begins with a scene from Krypton. Superman’s Mother, Lana says “He will be an outcast, they will kill him.” His father, Jor el (played by Russell Crowe) says “How? To them, he will be a god!”

Upon seeing this trailer I was offended. I was under the impression that the originators of the superman comic had patterned him after Jesus Christ. This impression came from some unknown source in the past and was reinforced by picking up and taking a cursory look at The Gospel According to the World’s Greatest Superhero By Stephen Skelton. Preparing for this blog , I looked a little closer. Skelton points out that the first originators of the comic book were Jewish. But he also found there are many contributors to the Superman story and discovered “that some of the storytellers in the Superman canon have deliberately worked to infuse the narrative with their religious, even Christic, intentions”. You can read more excerpts from the book here: https://www.cbn.com/spirituallife/inspirationalteaching/superman_messianic.aspx

In spite of the offending line, I thoroughly enjoyed the movie. It displays copious amounts of courage, self-sacrifice, tenacity and deep care for others. It easily passed my analyzing whether some thing is worthwhile of my attention (more about this next time), Kent

Kent Dickerson is a Christian writer, teacher, singer and lecturer. He calls his blog, “Remade Preacher”. The reason why that title was chosen was because God brought him back to full time ministry after leaving it for thirty years. The primary reason for leaving Pastoral Ministry was a deep-seated struggle with pornography. He facilitates two seminars. -Spiritual Battle Plan, The Path To Victory and -Spiritual Battle Plan, the Armor Of God. In both courses he calls upon men to first get into the battle against the sin in their lives and then to find new ways to call upon the Almighty God to lead, strengthen and protect them. He also emphasizes helping each other as brothers. In addition, versions of Spiritual Battle Plan are being developed for both men and women learners. A new class/seminar, Be Transformed, is now available as well. During the “Be Transformed” Seminar Kent teaches the art of analyzing one’s thinking patterns in order to allow renewing-of-the-mind transformation so that one can then devote one’s time to contemplating God. Kent is currently authoring a book tentatively titled, “Remade! A preacher finds victory over pornography and complaint.” He is also working on recording his first EP and videos Kent is from Abilene, Texas where he attended Abilene Christian University. He currently lives in Pyeongtaek, South Korea as part of the U.S. military community. View more posts