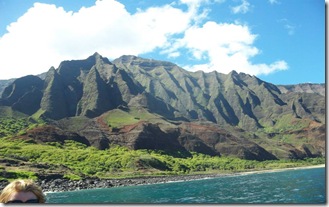 This picture was taken of the North Shore of Kauai from Captain Andy’s tour boat. The weather was very cooperative, so we traveled farther up the coast than typical. Saw the sights and even had an introduction to snorkeling.

While in Lihue we met Bruce Baumgartner, pastor of Calvary Chapel there. We enjoyed his story, how God led him to ministry and Kauai. We also were fascinated with his telling of knowing Bethany Hamilton and the making of the movie of her story Soul Surfer. It is the inspirational telling of Bethany being attacked by a shark and losing her arm while surfing. Her faith sustained her and amazingly she is back to being a professional surfer. She also now travels the country to tell her story. She believes that God allowed this to further His kingdom. Be sure and watch the documentary if you watch the movie. I also spent an hour introducing him to Spiritual Battle Plan and hope to work with him to bring it there.

Kent Dickerson is a Christian writer, teacher, singer and lecturer. He calls his blog, “Remade Preacher”. The reason why that title was chosen was because God brought him back to full time ministry after leaving it for thirty years. The primary reason for leaving Pastoral Ministry was a deep-seated struggle with pornography. He facilitates two seminars. -Spiritual Battle Plan, The Path To Victory and -Spiritual Battle Plan, the Armor Of God. In both courses he calls upon men to first get into the battle against the sin in their lives and then to find new ways to call upon the Almighty God to lead, strengthen and protect them. He also emphasizes helping each other as brothers. In addition, versions of Spiritual Battle Plan are being developed for both men and women learners. A new class/seminar, Be Transformed, is now available as well. During the “Be Transformed” Seminar Kent teaches the art of analyzing one’s thinking patterns in order to allow renewing-of-the-mind transformation so that one can then devote one’s time to contemplating God. Kent is currently authoring a book tentatively titled, “Remade! A preacher finds victory over pornography and complaint.” He is also working on recording his first EP and videos Kent is from Abilene, Texas where he attended Abilene Christian University. He currently lives in Pyeongtaek, South Korea as part of the U.S. military community. View more posts